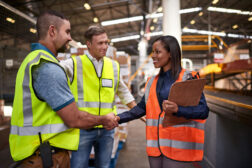 Successful Employee Onboarding Is the Secret Sauce to Retention

Economists continue to sort out why 4.5 million people quit their jobs in November, meanwhile, workers who chose to remain in their jobs point to a smooth and transparent onboarding process as a fundamental reason why they remained at work.

It’s a secret sauce, when a company can engage its staff and impress an employee with the promise of a reliable future.

“By the time I was onboarded, I was really on board […] companies need to make a good impression. Not just the employee, you know? […] It’s like a family. Without that feeling, it wouldn’t matter if a company give me a puppy to [stay.]”

“It’s a secret sauce,” when a company can engage its staff and impress an employee with the promise of a reliable future, says cashier Brittany Macchi, a 19-year-old cashier at a regional Pacific Northwest grocery chain.

The onboarding process is designed to seed a long-term relationship between employers and workers. Ideally, it’s intended to arouse a sense of belonging and help a new hire affirm they’ve made a good decision. But in a time of unprecedented turnover, onboarding is often neglected even as its importance grows.

Employers are overwhelmed with filling empty jobs and the far-reaching benefits – retaining a happy employee – of onboarding a new hire get lost in the mix. Experts say it’s incumbent on employers to rethink their onboarding because modern employees are demanding more.

People Have Choice in How and Where They Work

The U.S. workforce has unprecedented choice and notable leverage.

With a workforce fatigued, retiring early, or lured away by a shorter commute, managers and new hires across the country are, willingly or not, mapping new territory, and companies are searching for spicier ways to retain employees.

“If you’re an employer it’s not an easy position,” says Brent Vander-Pol, President of Peninsula Truck Lines in Federal Way, Wash. “If you’re a truck driver right now, you have choices.” Industry group American Trucking Associations estimated in October an unprecedented driver shortage of more than 80,000.

November’s spike in resignations topped off an unprecedented year when more than 38 million American workers left their jobs. What’s more, as 4.5 million workers quit, employers advertised for over 10.6 million jobs, surpassing 10 million the sixth month in a row.

Roughly 1.5 million jobs remained available for each of the 6.9 million unemployed Americans in November. The most in 20 years.

#1 App-Free Attendance & Communications Platform! Communicate With Your Employees in a Simple & Effective Way

Nobody knows when workforces will stabilize, but in 2022 a poorly executed, outdated, or constrained onboarding process can shutter an operation.

Kitsap Transit, which operates passenger ferries in Kitsap County, Wash., just announced that they’ll drastically cut, if not eliminate entirely, ferry service to nearby islands for the foreseeable future.

The service is, in large part, at risk because onboarding new crew members takes roughly two years. The service is logistically frozen.

“We may need to cancel trips on our ferries,” according to Kitsap Transit Executive Director John Clauson in a prepared statement asking for the public’s patience.

While early retirement and other factors are at work, the service is, in large part, at risk because onboarding new crew members takes roughly two years. The service is logistically frozen.

Merchant mariners, like truckers, are mobile with choices and can find better work, and pay, fast. To be sure, trucking companies are taking unusual, if not extraordinary, measures to hire drivers and relying on the basic maxim that 'money talks'.

According to industry groups and January job listings, trucking companies offered incentives ranging from $1,000 signing bonuses to lucrative sign-on bonuses that pay extra-large sums over the year’s course to ensure drivers are happy or, least, not so dispirited they quit.

Vander-Pol, who saw pandemic fatigue up-close when his wife quit her job and left the workforce in 2021, hesitantly admits his regional trucking company is “probably pretty behind” in its onboarding procedure.

He says companies such as his can’t afford extravagant bonuses and — “for now,” he says — his standard pitch of nights and weekends at home and a good medical plan needs to be enough.

“I don’t have a secret sauce,” says Vander-Pol, a former president of Washington Trucking Association. “I don't know if there is a secret sauce."

An Onboarding Process Sets the Foundation for Workplace Culture

Business owners, workers, and human resources professionals say few companies if any can afford to take onboarding for granted or as an afterthought in a worker’s market.

The challenges are abundant. Workers are demanding more, from increased wages to flexible work arrangements to help with childcare to healthy workplaces.

You have to deliver something on the front end that connects the employee and the company. That’s just basic.

According to the MIT Sloan Management Review, leaving a toxic work environment is 10 times more important to workers than money.

To be sure, workers say they expect more than a paycheck and want meaningful, fulfilling jobs that can accommodate their personal lives.

“You have to deliver something on the front end that connects the employee and the company. That’s just basic,” says Barbara Patino, who works for a Las Vegas, Nev. human resources firm.

Entrepreneurs such as Karmel Humphrey, who lives and works in Southern, Calif. think such a realignment was driven as much by the pandemic as an inevitable shift in power to a strained middle class.

Humphrey says he initially created his company and storefront after two black men were arrested in Philadelphia for sitting in a Starbucks.

He also created it, he says, after what seemed like countless onboarding protocols aroused some introspection and ambitious thought.

It shouldn’t just be a hoop you jump through [...] Little can be as dispiriting for a person of color as tokenism or a reference to their new employment as a 'diversity hire'.

While he noticed employers embraced onboarding as a critical element of new employment in idea, they didn’t take it seriously in practice: “It shouldn’t just be a hoop you jump through,” he says. More, little can be as dispiriting for a person of color as tokenism or a reference to their new employment as a “diversity hire.” Outdated language such as that, Humphrey says, “devalues you instantly.”

“Who wants to work for that? I thought, ‘I’m just creating my workplace culture’,” he says because he’s endured too many […] opaque procedures that left him disconnected to jobs he otherwise expected to enjoy.

Like many employers, Humphrey says, he’s focused on the desperation of the economic moment but he says his company’s youth means he doesn’t have old policies to reimagine. Humphrey wants to create an uncomplicated onboarding that offers new hires better experiences by personalizing the process and “recognizing their humanity first.”

“I’m trying to do it right the first time in this [pandemic],” he says, “and I’m interested in what [employees] care about.” Humphrey figures successful companies will invest in onboarding strategies that foster personal safety, communication, authenticity and, he says, an authentic personal connection.

Employees are joining a culture when I hire them. That’s really the whole point.

“It’s workplace culture. It’s [all] culture,” and he suggests they’re not wholly separate things. “Employees are joining a culture when I hire them,” he says. “That’s really the whole point.”

Onboarding is often overlooked or dismissed as a formality, but it’s designed to cultivate a long-term relationship between the employer and the employee.

Studies show it’s a critical time for employers to foster a sense of belonging for employees and affirm they both made the right decision. Employee Attendance. Communication. Engagement. Productivity. Delivered Over Text. What more do you need?

Book A Demo To See It In Action
*By clicking the button you agree to TeamSense's Privacy Policy. Your information is never resold.

More Articles That May Interest You

Every employee wants to be recognized for the value they bring to your company. Show them that you appreciate them with these 15 simple (yet meaningful) gestures.

Renewing and Rescaling: 2023 Forecasts and Trends in Manufacturing in the U.S.

Even though ripple effects from the last few years still face the industry, manufacturing is moving forward into a new era of reinventing itself.

These days, no company is a stranger to team member turnover. And even though employee retention can feel like an uphill battle, there are still plenty of ways to get your team to stay.